Blog
You are here: Home / Blog / Blog / The Breads of Israel 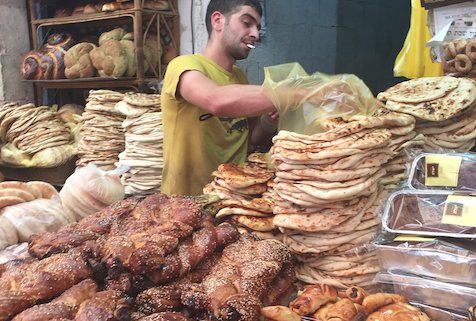 I always tell my nieces, nephew and students that homemade or artisan made bread is the good life. Adding butter makes it a divine life, ha!

Bread goes far beyond physical sustenance. It has a level of spirituality that other foods don’t. Along with wine, bread is one of the key elements of religious ceremonies like the weekly Sabbath and communion. It is first mentioned in the bible in Genesis when King Melchizedek offered it to Abraham.

“Malki-Tzedek king of Shalem brought out bread and wine. He was cohen of El ‘Elyon (God Most High), so he blessed him with these words: “Blessed be Abraham by El ‘Elyon,
maker of heaven of earth
and blessed be El ‘Elyon,
who handed your enemies over to you.’ ”
Genesis 14: 18-20

This specific act of giving bread and wine to Abraham from King Malki-Tzedek is a messianic picture of The Messiah- The Bread of Life whose Blood is The Atonement symbolized by wine and a gift to the seed of Abraham, the Father of people too numerous to count just as the stars in the heavens.

If that isn’t enough proof of the spirituality of bread, consider the Tabernacle God told the Israelites to build in Shiloh in the book of Exodus.

Giving very specific instructions and mind bending detail on the construction and prescribed use, bread played a very important role in the house of God on earth.

Specifically, the bread used in the first Tabernacle (and then in the First and Second Temples in Jerusalem), was called the show bread or…

“On the table you are to place the bread of the presence in my presence always”- Exodus 25: 30.

I thought it was quite striking that last week’s Bible reading was Exodus 25-27 at the same exact time an article came out about a very unique baker in Israel, Les Saidel of Saidel’s Bakery.

Les is working to recreate the bread that was once used in the Tabernacle in hopes to be ready for the upcoming rebuilding of The Temple in Jerusalem. Fascinating! Click here to read about it.

Click here for a very cool behind the scenes look at Saidel’s Bakery…it’s a virtual Foodie Field Trip!

Even more cool is that I bring my groups to this bakery on my Biblical Food & Wine Tours. So much fun!

God uses bread to symbolize His presence.  Something to think about next time you eat bread.

May you have a good week in His presence.

The Wines of Israel

A Visit To Haifa
Scroll to top