You are here: Home / Blog / israel 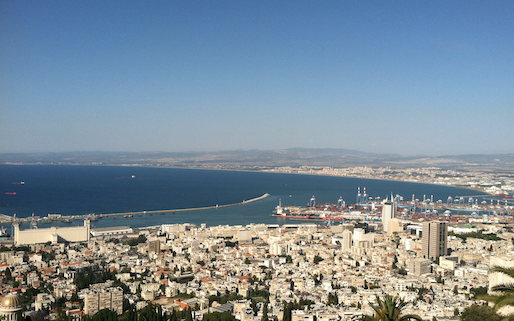 From the very first moment I saw Haifa, I instantly knew I could easily live there.

Situated on the slopes of Mount Carmel along the coast just north of Caesarea, Haifa is Israel’s 3rd largest city after Jerusalem and Tel Aviv. Israel’s port city, Haifa is where the export/import worlds meet.

Home to the magnificent Baha’i Gardens, the lookout from the top is absolutely stunning.

University of Haifa and the ever impressive Technion, Israel’s leading tech university is located in this gorgeous city. Rumor has it that Technion has developed a type of “smellavision”. Can you imagine how this is going to change cooking shows? Woohoo!

Just down the road

Just down the road from Haifa is a place that was hard to visit yet so very important. It serves as a reminder of the fight the Jewish people have endured just for the right to exist and live in their God-given homeland.

As WWII was winding down, the British government who controlled Israel at the time, decided to allow some Jews to immigrate to Israel. At the time, Israel was called Palestine…a name given to the Jewish Holy Land by the Romans in an attempt to wipe out the name of Israel.

Can you imagine the relief and renewed life-giving hope the Jews felt as they were finally headed to freedom?

Only it didn’t quite go that way.

Instead of immigrating to freedom, the Jews were shipped to, Atlit, an Illegal Immigrant Detention Camp. Complete with barbed wire, armed guards and degrading living conditions. From one hell to another.

In October of 1945, the Jews detained at Atlit were liberated by a young Israeli special forces unit called the Palmach through a clandestine operation.

A glimmer of truth can be found on the placard given by a group of Christians from the UK acknowledging this atrocity and asking forgiveness.

Distraught over seeing this, I struggled to come to grips with yet another attempt to suppress God’s people from living as free people in their land.

Walking back to our tour bus, I couldn’t help but apologize to our Jewish Israeli guide for all the horrors that have been done to his people. His reply?

“Thank you, but we look forward, not backward.”

The Jews…this is why they are a beacon of hope. They never give up. If anyone has the right to “give up”, it is the Jews. But they don’t.

To live is in their DNA.

Life. This is what they do. They create, they work, they build, they L-I-V-E!

For those who have been reading my blog for awhile, you know I say it over and over… there is no other people group who inspires me more than the Jewish people.

It is so very important to not forget the past. To learn from history so that it doesn’t repeat itself. But it is life giving to look and move towards the future. This is the secret to living.

And the Jewish people lead the world in living.

One of my absolute favorite experiences that I’ve recently started doing is bringing my travelers on a Foodie Tasting Tour of Jerusalem’s famous Shuk, Mahane Yehuda. It’s Israel’s version of a farmer’s market but with more depth and soul.

With our friendly local guide, we taste and learn our way through this famous market and the different cultures represented there.

And spices. Oh my goodness, the spices and flavors are incredible and some are only found in Israel. Za’atar…ever heard of it? What about hyssop that’s mentioned in the bible? That’s another name for za’atar.

See?, even the food points us to some level or notion of spirituality.

A tour of the Shuk is a unique experience that most tours don’t offer. Actually no tours that I know of.  I once read that a Rabbi in Israel said, when you eat food grown by Jews in Israel, you are eating proof of God’s promise to bring His people back to their ancestral homeland in preparation for the Final Redemption for all of mankind.“But you, mountains of Isra’el, you will sprout your branches and bear your fruit
for my people Isra’el, who will soon return.” Ezekiel 36:8

We are living in the day of the words of Ezekiel coming to pass, just as promised.

How’s that for soul food?

Join me for an unforgettable life experience in Israel!